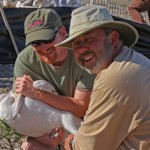 Gunnison: The Island and Its Pelicans

Gunnison Island is home to one of the largest breeding colonies of American White Pelicans in North America. Numerous studies have been carried out on the island in the past, and currently the Utah Division of Wildlife Resources is conducting various studies on the colony that has yielded new and exciting information about these fascinating birds. A description of historic and current activities underway will be presented including results from ongoing satellite tracking studies. Current issues within Utah and within the Pacific Flyway will also be discussed along with monitoring and management actions scheduled to get underway in 2014.

Jim Parrish recently retired from UDWR as the Native Terrestrial Species Program Coordinator. Prior to that position, he served as the Utah Partners in Flight Program coordinator and along with Frank Howe and Russ Norvell coordinated publication of the Utah Avian Conservation Strategy. As for educational background, he has a Ph.D. in Wildlife and Range Resources, and spent two years doing post-doctoral studies in Wildlife Toxicology with an emphasis on birds. Originally from Alabama, he lives in northern Utah and is currently making a documentary film on Golden Eagles and pursuing his passion for photography.

John Neill is employed by UDWR as the Wildlife Biologist for the Great Salt Lake Ecosystem Program (GSLEP). Jim, John Neill, and John Luft, also with GSLEP, initiated the current studies on Gunnison Island and have continued collaborating on the studies since Jim retired. John Neill conducts annual counts of the pelican colony on Gunnison and leads field crews to the island for on-the-ground activities carried out as part of the current studies. He has an extensive knowledge of the bird life of the Great Salt Lake including the pelicans on Gunnison Island.