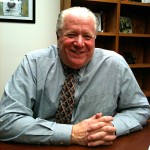 Catalyst for Conservation: The Role of the Mitigation Commission at the Great Salt Lake

Mr. Weland was born and raised in Phoenix, Arizona.  He has a degree in Sociology from  Arizona State University and a law degree from Lewis and Clark Law School in Portland, OR.  During law school, he worked as a law clerk for the Department of the Interior’s Office of the  Solicitor in Washington, D.C., and for the legal counsel for the Oregon Department of Fish and  After law school, he accepted a position as Contracts Officer for the Oregon Department  of Fish and Wildlife, then served in several management positions before becoming an Assistant  Director of the agency and Chief of Habitat Conservation in 1984.  In that capacity, he worked  with many of the Federal and State natural resource management agencies in Oregon for several  years before accepting a temporary assignment in 1988 with the Forest Service in Washington,  D.C.

He spent one year on the Wildlife and Fisheries staff working on planning and appeals  issues, and then one year on a Congressional fellowship.  He served that fellowship assisting the Utah Congressional delegation with the negotiation  and drafting of the Central Utah Project Completion Act of 1992.

After completing his fellowship,  Mr. Weland accepted a position as Legislative Assistant in the U. S. Senate where he worked for  two years on Federal land and water management and appropriations issues, including Federal  forest management and restoration of the Elwha River in Olympic National Park.  He then worked  one year for the National Parks Conservation Association in Washington, D.C. before applying for  the job of Executive Director for the Mitigation Commission.  Mr. Weland was appointed to the  position in February 1995.

Pano of the Great Salt Lake Sunset by Kelly Horne