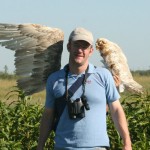 Linking Sites and People: The Importance of Great Salt Lake as a Hub for Migratory Bird Conservation

Great Salt Lake is one of the most important sites in the USA for migratory shorebirds, ducks and other waterbirds, with several million birds using the lake annually. Its importance is reflected in the recognition of a suite of globally Important Bird Areas (IBAs) for over 15 waterbird species that breed or use the lake as a migration stopover site. The effective conservation of these species requires action beyond any one set of political borders. This was recognized early in the history of conservation efforts at Great Salt Lake, when stakeholders from three sites sharing species along the same migration pathway came together (in 1998) to form the “Linking Communities, Wetlands and Migratory Birds Initiative”, or Linking for short. These sites are the Chaplin Lake and associated lakes in Saskatchewan, Canada, Great Salt Lake, and the Marismas Nacionales complex of Nayarit, Mexico.

In 1991, the global significance of Great Salt Lake for migratory bird conservation was further recognized by its designation as a site of “Hemispheric Importance” within the Western Hemisphere Shorebird Reserve Network (WHSRN). Designation as a “Hemispheric Site” means that over 500,000 shorebirds or 30% of a geographic population visit the site each year. The numbers of just one species, Wilson’s Phalarope, are sufficient for Great Salt Lake to qualify as a Hemispheric Site.

Further recognition of the international importance of Great Salt Lake came in June 1992, with a “three-way twinning” with Laguna Mar Chiquita (Argentina) and Mono Lake (California) WHSRN Sites, based on ecological similarities and large numbers of migrating Wilson’s Phalaropes. In recent years, through the support of Kennecott Utah Copper Corporation, Rio Tinto, USFWS-Neotropical Migratory Bird Conservation Act and the BirdLife International Partnership, this network of conservation linkages has been expanded to include other sites in South America that are critical for species shared with Great Salt Lake. These include sites in Peru, Chile, Argentina and Paraguay.

My talk will illustrate the network of linkages that connect Great Salt Lake to the rest of the hemisphere through shared migratory birds, underline the interdependence that exists between these networks of sites, and report on recent efforts to extend the successful Linking approach pioneered at Great Salt Lake with communities in southern South America.

Work
Rob Clay is the new Director of the Western Hemisphere Shorebird Reserve Network (WHSRN) Executive Office, (Asuncion, Paraguay) which is hosted by the Manomet Center for Conservation Sciences. WHSRN is a voluntary consortium working together across the Americas to protect and manage habitats to benefit shorebirds.

Prior to joining Manomet, Rob worked for Birdlife International as Senior Conservation Manager in the Americas Secretariat, leading the development of BirdLife’s conservation programs for grassland birds, migratory birds, and globally threatened birds. He was instrumental in building BirdLife’s Southern Cone Grasslands Alliance, a coalition of cattle ranchers, government agencies, research bodies, and conservation organizations that is working to incorporate conservation into the productive landscape of the South American pampas, to preserve both grassland-dependent bird species and the region’s traditional gaucho ranching culture. As BirdLife’s senior staff member focused on the conservation of migratory birds, Rob was also responsible for overseeing BirdLife’s support for the Linking Communities initiative, including its extension to include sites connected by the same migratory species in Peru, Chile and Argentina. Rob is the current Chair of the Waterbird Conservation Council, has been a member of the WHSRN Hemispheric Council, and is Vice President of the Heron Specialist Group (HeronConservation).

Background
Rob joins Manomet on 1 May 2014. From 2005 to 2014 he worked for the BirdLife Americas Secretariat, and prior to that he worked for the BirdLife Partner in Paraguay (Guyra Paraguay), an organization he helped found in 1997. He is a native of the United Kingdom but has called Paraguay home since 1997 (except for two years spent in Ecuador). His interest in neotropical birds and conservation began during an undergraduate expedition to Paraguay in 1992 and led to Ph.D. studies of manakins in Costa Rica and Panama.

Education
Rob received his B.A. in Zoology and his M.A and Ph.D. in Behavioral Ecology from the University of Cambridge (U.K.). 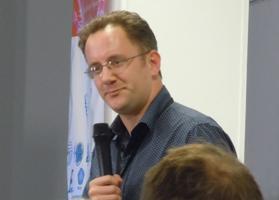 The Manomet Center announced early this month that Dr. Rob Clay will be the new director of the Western Hemisphere Shorebird Reserve Network Executive Office.WHSRN is a voluntary consortium working across the Americas to protect and manage the hemisphere’s most important habitats for migratory shorebirds. Read the full article