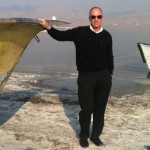 The ecological, financial, agricultural, and human health consequences of the Aral Sea disaster have been thoroughly documented and reported. The steady decline in volume of the Aral Sea over the past 50+ years has caused indisputable damage to the health of humans and biota in the Aral/Caspian Basin. Efforts have been made to recover some of the beneficial uses of the Aral Sea and to improve the management of water in the Aral Sea watershed. While some projects have produced favorable outcomes, many others have met with little to no success due to institutional reasons or from implementation failures. In contrast, the World Bank funded dam project on the Small Aral Sea has been a demonstrable success in terms of restoring marine conditions to the Small Aral Sea capable of supporting the recovery of aquatic species including vertebrates and invertebrates. Ecological conditions of the northern bays of Tuschybas and Chernishov have similarly shown some limited improvements in limnological conditions and ecological functions. In spite of these improvements the region remains severely impacted by the demise of the Aral Sea. The pathway forward remains intertwined in international and regional conflicts over water development and usage and will certainly be influenced by the expansion of oil and gas development in the former seabed of the Aral Sea.

Conducted detailed ecological research on the GSL on a weekly, bi-weekly, or monthly basis for the past 14 years (over 200 ecological surveys of the GSL).

Director of research programs on salt lakes in Russia (Siberia), Uzbekistan, Turkmenistan and Kazakhstan from 2000 to the present.

Extensive ongoing research on the Aral Sea, Pavlodar region of Kazakhstan, and the Altai region of Siberia.